In our Literature class we analyse the poem “The Border Builder” by Carol Rumens and made some questions of our booklet. I worked with Nicolas Monguzzi and Bautista Olaizola.

In History we made a timeline with the more importants events of the French Revolution, we used some tools that Lenny gave us.

Here I will choose a stanza or a set of lines of one of the Romantic poems which my partners had analyse and present to me. I will analyse  “Soldier Rest”

Dream of fighting fields no more:

Sleep the sleep that knows not breaking,

Morn of toil, nor night of waking.”

The first line its repeating the title, “Soldier rest” repeating that war had end, there is nothing to worry about, or that he is already dead and now he can relax. “Dream of fighting fields no more” she is telling the soldier that all his problems are gone, nothing can bother him because he is now at sleep/death and he has to rest. The third line when it said “seep the sleep that knows not breaking” this means that the soldier does not have to be on alert. There is also the repetition of the word sleep witch calls the reader attention and makes an emphasis on that word. And the las line, the morn is the morning,” nor night of waking” is an oxymoron because at night you usually rest but his nights were of waking because he had to be on alert. Waking is also a period of moving, but it also means a funeral, so there is a contradiction and you can analyse it in both ways. So this stanza is making emphasis on the fact that the soldier now is under protection and there is no motive of being on alert, the soldier can be at sleep or death, there are both ways in which your body relaxes and there are no worries.

The connexion between this stanza and “The poems share a criticism to the industrial, urban, rational and bellicose society of the 18th century”is that the ration society is criticized because war is not rational, so during all the poem the rationality is criticized and so do war.

This is  a PREZI analyzing the poem, Ode on Melancholy, written by John Keats.  There you will find the analysis we (Bauti, Mara, Nico and I) have provide and the relation the poem has to the Romantic period.

These are some questions we did in class to introduce the topic of Endocrine System. I worked with Mara Ripoll.

1) A hormone is a chemical substance, produced by a gland and carried by the blood, which alters the activity of one or more specific target organs. 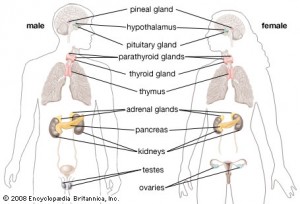 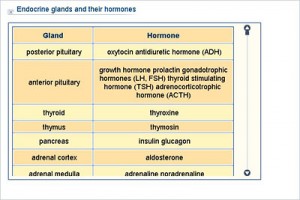 3) Adrenaline is produced in the medulla in the adrenal glands as well as some of the central nervous system’s neurons. Within a couple of minutes during a stressful situation, adrenaline is quickly released into the blood, sending impulses to organs to create a specific response. It triggers the body’s fight-or-flight response, it prepares your body for a vigorous action. Gives you more energy, your heart beats louder. It  also triggers the blood vessels to contract to re-direct blood toward major muscle groups, including the heart and lungs. The body’s ability to feel pain also decreases as a result of adrenaline, which is why you can continue running from or fighting danger even when injured. Adrenaline causes a noticeable increase in strength and performance, as well as heightened awareness, in stressful times. After the stress has subsided, adrenaline’s effect can last for up to an hour.

Corrections of the Essay- Yellow-Wall Paper

This are the corrections we made about our first essay of the Yellow-Wall Paper, and we made a conclusion.

The “Yellow Wall-Paper” is a gothic story written by Charlotte Perkins Gilman-, The protagonist is a woman who was diagnosed of an after birth depression, she had recently been a mother and her child was taken away because of this “depression” she had. John is her husband who is a professional and during the story we can identify that in many ways he could be the villain of the story. However, though his actions may have a negative effect on his wife, those results are not his intentions. Therefore is is a villain though he is unaware of that condition.

The setting of the story is in the 19th century with positivism. This new ideology changed everyone’s way of thinking,was at its peak, and this scientific trend is what makes John the villain, ven though he does not mean. People started looking for scientific answers and  John was a doctor and we can say he is the epitome of positivism, “If a physician of high standing, and one’s own husband assures there is a temporary nervous depression”, he truly believed he was doing the right things to help his wife. John left aside his feelings and emotions, he was more concerned about the medical results, than what she was feeling “-dear, you are better … -Better in body perhaps” he was making her say what he wanted to listen. He told her she looked better, physically she was happier and not so skinny, but she responds that she was not feeling better in her inside, maybe on the outside, the appearance, “John does not know how much I really suffer” she was hiding and repressing her feelings and thoughts so that John would not be scared nor send her to an hospital,“But john says that if I do not get well faster he shall send me to Weir Mitchell in the fall”, He was convinced that was a temporary illness and maybe she was just being herself. This is  why we can say that John was a villain, because he treated her wife as another case, and he tried to convince her and himself that she was better that was what he wanted to listen and which was not the truth.

John was prohibiting her wife to express herself, to be free. He forbidden her to read or write “There comes John, and I must put this away, he hates to have me write a word” The woman was alone and bored, it was not fair that John did not let her read nor write. Also, the woman asked him to change to another bedrooms, she felt that there was something wrong about that room, but John behave as an ignorant and told her they were going to stay up there because is was better for her, “Then do let us go downstairs” but they did not, they stay at that room which made her feel uncomfortable and nervous at the beginning.

When John put her wife in that room, isolated from the rest of the house, when he did not let her do exercise, write about anything or even to see her own baby it was because he thought that he was doing the right thing, he was helping her wife. ”John is a physician and perhaps that is one reason I do not get well faster” he was not the indicated doctor that would have made her feel better, he was a physician but he was absolutely convinced that he was doing the right thing, that he was helping the person he loved and he was married with. “John says the worst thing I can do is to think about my condition, and I confess it always makes me feel bad” the narrator here confess that some things that John was doing, made her feel better. So he was trying to help, and he did not knew he was not doing the right things. So such ignorance  reproduced his villainy.

In the light on the previous analysis, we can say that John was partly  the villain of the story, because the Positivism was the main cause why John acted as her wife was another case and only acted using his rationality and not his heart. But also, Women weren’t allowed to read nor write because of the social gaze, and as John was part of it he didn’t let her wife to express herself and by this he was repressing her. But all these things weren’t done on purpose, John was just trying to do the best for his wife because he loved her but he didn’t realized he was not helping her.

In our  Biology class we had to make groups and prepare presentation on different addictions,we had to prepare it on TOBACCO SMOKE. I worked with Rochi, Flor, Delfi, and Pancho.

This is our presentation

This is  a Prezi we made developing the Discrimination in School, we had to prepeare an Oral on this topic. I worked with Mara Ripoll and Nicolas Monguzzi.

Here is the Prezi.

This is a fakebook we had created on, Marie Therese, Princess of de Lamballe, which was a character on the French Revolution. I worked with Mara Ripoll.

The eye as a sense organ

6)This is the videos we have found of the Pupil Reflex.  the propuse of pupil is to control the amount of light entering to the retina.

BRIGHT LIGHT—–  CONES IN RETINA—– BRAIN—–MUSCLE IN THE IRIS

the effect: circular contracts and radial relaxes, they are antagonic muscles.