In our History class, we had been practicing how to analyze sources. This time, we had to scan with our cellphones some QR codes. Depending on the codes, we had different sources, We were USA in the 1920s. 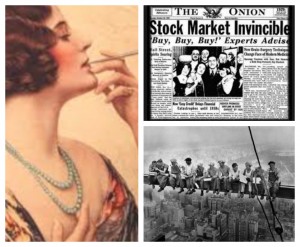 This is a primary source because it is a real photo that was taken in the 1920s. In this image you can see some workers eating and resting on scaffolding. This is a very interesting picture because it shows how many people were working on this kind of risky jobs, it can be deadly to be working on such high places without protection, this people probably used to be unemployed before. This picture is very characteristic of the 1920’s because this decade was a huge boom of house construction, and skyscrapers started appearing.

This is a primary source, it seems to be a painting of a woman smoking which before the boom it was seem as a good habit. It show class and it made women look like men. They wanted to look like men so they could have the same rights.

This is a picture of the cover of a real 1920’s newspaper (primary source), here you can read titles that show prosperity, people encourage others to keep buying shares because as the title says, the stock market is going great, the people in the picture seem to be happy and well off. As we know, in the 1920’s people were enjoying life and getting easy money at the stock market, and even the government encouraged them to do so.